skip to main | skip to sidebar

When the lights go out! 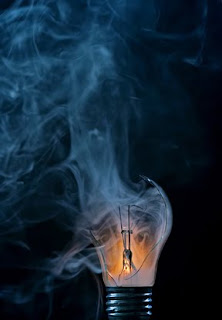 The first of the year was the day I found out just how annoying an experience like losing your power can be. It can change your business from online, to offline, or at the very least in crisis mode in seconds. We are all used to short fluctuations from time to time, but complete outages make you realize how dependent we are on electricity.

We had a complete power outage at the first of the year. Our battery back up (UPS) did its job,keeping the phones and servers running for about an hour or so. However the outage continued. We looked to So. California Edison to provide us with an estimate to restore power. At first it was about 2 hours. Then it was extended another two hours, then to our closing time, then to midnight. Finally they estimated that they would restore power by the middle of the night. As it was, the power finally came back on at about 2:00am.

We did not know how long we would be affected, but we knew that we were going to be ready for business the next day. Our generator that we had in storage would not start. The carburetor was frozen, the gas not getting to the engine. So we purchased another. We ran a few extension cords to the needed sources of energy. All powered up just the way that we had planned.

It emphasizes the need for back up plans. As the owner of Micro Technologies, I recommend a good battery back up, nothing lower than an American Power Conversion BR1500G. You may need several, and some of them with a higher wattage rating. Not only for the data, but the phones, the servers, and anything else that has a plug.

But a good UPS does fail after some time (depending on the size of your UPS), so you need a good plan B. For example when the battery back up can no longer power your server, you will need an alternate source of energy, like a power generator.

In order to avert another disaster, you should have your data backed up. The power comes back sometimes with a surge, so you will want to have it plugged into a surge protector. All of us have lost a good TV, refrigerator or other appliance this way. Do not let your data go down. The potential is there for another unanticipated problem.

One our partners at Xilocore Corporation can help you run your data from a virtual server in the event of a complete power failure. It is Cloud backup technology that allows you to run your server from a remote location. You can log in from a Starbucks for example, getting to your precious data.

So we have discussed three potential problem areas. No power, data loss, and gaining access to your data after complete power failure or disaster. We would be happy to discuss with you a plan, not only protect your data, but also keep you powered, or your data online “when the lights go out”.
Posted by Micro Technologies at 5:55 PM